Nestled in a little corner of Park Slope Brooklyn, the Dram Shop purports to serve a delicious texas style burger. Our experience differed. One of the larger burger club turnouts, we had 12 show up, including 2 first timers (and hopefully not last timers too!). The evening started with an audible hum of excitement as this was the first burger club of 2009 and the hiatus had been too long. The booths are nice and large at the Dram Shop, and can comfortably fit 6-8. Unfortunately we had double that many people. The bar was accomodating and allowed us to pull up stools to seat the rest of the party. Service was spotty to non-existent. Drinks took over 15 minutes to arrive, and when they did, many were wrong or never made it. The food took nearly 1/2 hour and almost everyone's burger was between lukewarm and cold. The highlight of the meal was the little cubes of breaded mac and cheese, which were actually hot. The burgers are "texas" style- square patties, served traditionally as a double with shredded lettuce, pickles and onion. The complex ordering of our group apparently overwhelmed the kitchen and the orders were brought out willy nilly, with the server calling out a particular order but not necessarily having that burger in hand. Needless to say, a mess with burgers being eaten by the wrong recipients. I found the burger quite tasty, not needing any additional salt or ketchup. The fries were ok, but lacking salt.

Overall grades given ranged from C- to B+. I don't think anyone will be returning.
Posted by Miss "Garlic" M at 8:12 AM No comments: 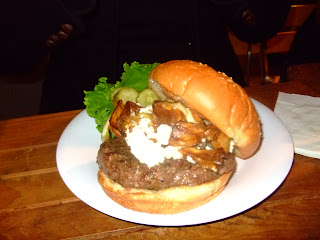 This place wins for fun toppings. The blistered jalapenos were actually hot. We each mixed and matched. As far as the doneness of the meat...well this is the first place we've been that seems to under cook. I ordered mine Medium and it arrived Medium-Rare....in this case I lucked out. In the past I had sworn to order my burgers Medium-Rare because of most restaurants tendency to overcook.

The burgers are very big and super filling. In fact leah and I road 2 laps around prospect park post burger just to digest.
Posted by Liz aka tabasco lover at 1:32 PM No comments:

Leah and I took a little trip to the shack for dinner last night, only to be surprised (and scared) by several scurrying mice looking for their own share of the delicious eats. Leah happily obliged by throwing them a fry. There was much squealing and hopping afterwards. I hope they shared the wealth.
Posted by Miss "Garlic" M at 3:42 PM No comments:

Scott makes an unscheduled weekday afternoon trip to the Shack.
Posted by Adam at 3:21 PM No comments:

I was told I haven't posted enough so here I am. How does everyone feel about a special Tuesday June 17th edition of burger club so that we can wish Scott a bon voyage before his trip to the far east?
Posted by Miss "Garlic" M at 2:19 PM No comments:

Is a morning meeting of the Burger Club in the cards?

Midtown Lunch has news of Goodburger's breakfast burger: One patty with hash browns and an egg for $5.95. 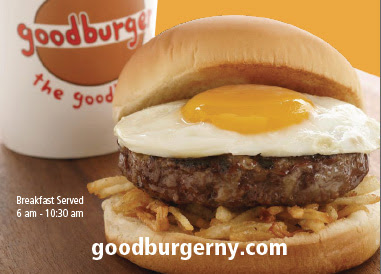 cheeseburger in a can taste test

I have not watched the video yet but I can only imagine...
Posted by Miss "Garlic" M at 2:38 PM No comments: